Augur is a decentralized market platform for making predictions which uses the “Wisdom of the Crowd” principle to forecast the outcome of an event.

This method relies on collecting information from the online community and averaging it into the most realistic possibility to determine the most probable outcome. The predictions that turn out to be correct are rewarded by the network, while incorrect reports are penalized, therefore motivating network participants to be truthful.

What is a ‘Prediction Market’?

A prediction market is an exchange-traded market used to predict future events. Augur’s market enables participants to buy and sell shares on the outcome of future events, with the pricing being determined by the crowdsourced possibility of the event happening.

The platform employs the “Wisdom of the Crowd” principle to produce largely accurate estimates of the event outcomes. The concept is based on using large sample size answers which tend to be just as accurate or more so than the answers provided by a small expert group.

Augur is designed to be a prediction market platform that will reward users for making correct event predictions. The creators of the markets and the holders of REP tokens, who report the events, will also receive rewards.

Predictions in the market are produced by trading shares in the outcome of real-world events and if you purchase shares in the correct outcome, you make a profit.

The profits are based on the odds of an event occurring, as established by the crowd. Each share is worth 1 ETH. If there are even chances of an event happening you would pay 0.50 ETH for a share, and if the event does happen you will receive 1 ETH. In the eventuality that the event does not happen, 0.50 ETH is lost from the sum you spent to purchase your shares.

Share prices will change depending on how many people buy or sell their shares, which could either increase or decrease the price. This lets users buy shares at a low price and then sell them at a higher price as more people bet on the outcome of an event.

How to Create an Augur Market

Anyone is able to create an Augur market for any kind of real-world event. In order to create it, you will have to pay a small Ethereum fee, and the market can be based on any kind of topic.

Market creators establish their own fee, which is subtracted from the total pool collected when the market closes. Creator fees are situated in between 0% and 50% and can be lowered after the market is created, but raising it afterward is not possible.

The creator fee is taken from the trader rewards, so that creators are motivated to keep fees as low as possible, but high enough to cover market creating costs. 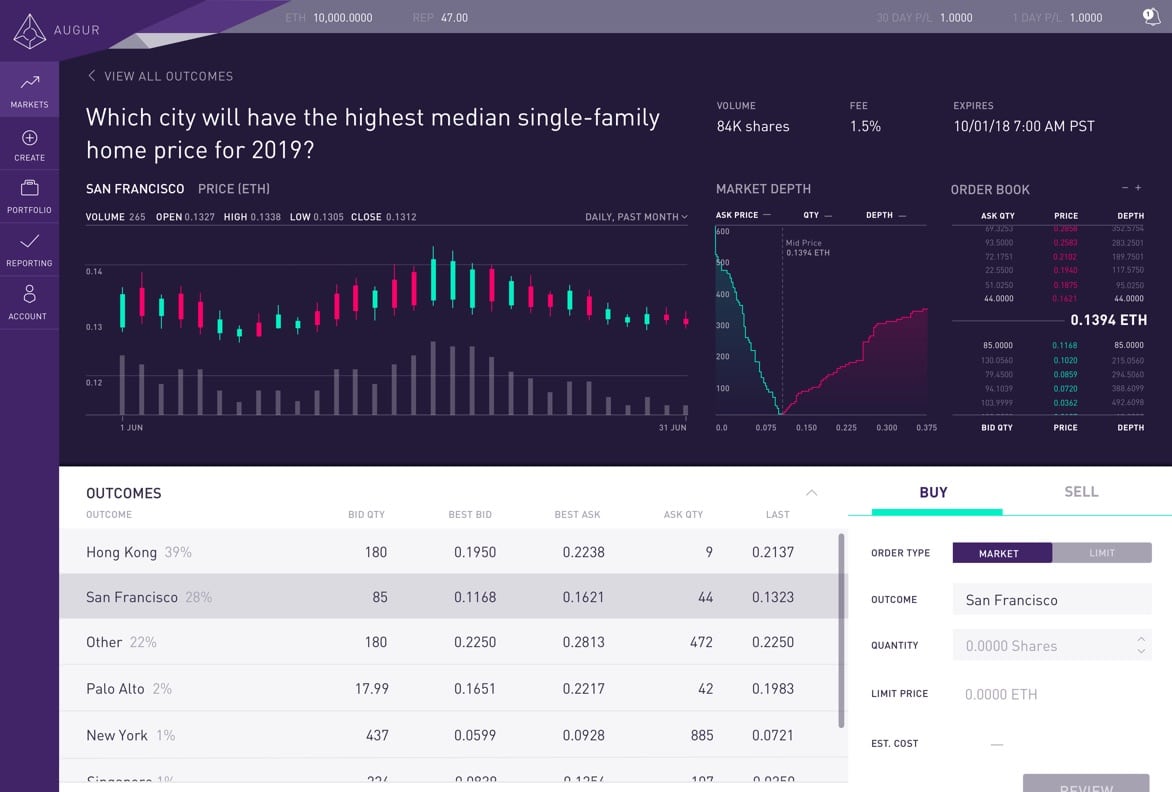 REP (or Reputation) is the native token of the Augur Decentralized Oracle System. It is used to “score” events on the Augur platform. Holders can stake these tokens to report on the outcome of the events posted in the marketplace.

However, REP tokens are not an investment, as they don’t give out passive payments. Instead, they are a tool that help the platform function.

Augur has a maximum supply cap of 11 million REP tokens, 80% of which was sold in their ICO. REP holders are called “Reporters” and have the duty to accurately report the outcome of the random events listed on the Augur marketplace on a minimum weekly basis.

If these “Reporters” do not make the report/s inaccurately, the Reputation of those individuals is evenly split among all the Reporters who did report accurately in the same reporting cycle.

In short, REP tokens are gained and lost based on the reliability of user votes with the consensus.

Augur was among the first serious projects to launch on the Ethereum network, and after nearly three years of development they managed to launch their official mainnet, many in the community have started doubting this project’s credibility.

Nevertheless, the principle on which is based does offer an interesting alternative to the systems used by traditional prediction markets.

Biggest Crypto Ponzi Scheme, BitConnect is Back Under FBI’s Investigation

Can Cryptocurrency and Blockchain Be Separated?

Bitcoin is the dominant cryptocurrency and continues to gain traction. And in order to store bitcoins, you need a wallet....

An economic stimulus is to be introduced in 2021 in support of the US economy. Correspondingly, there’s been a rise...

Cryptocurrency price prediction and analysis help investors to make the best possible decisions. The following analysis covers three of the...